Northampton celebrated its 350th anniversary in 2004. The Town of Northampton (originally the town of Nonotuck) was granted its Charter in 1654. In 1884 the City of Northampton was incorporated.

Our city seal contains many references to critical events and symbols of our city’s 350 years.

The city motto appears at the bottom and are three themes that continue to be important to the people who make their homes here. 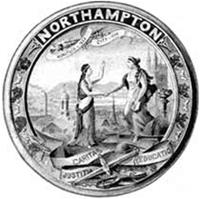 The moths around the outside circle are silk moths, representing the silk industry in Northampton, a short-lived Utopian community-based project in the 1800s located in the Florence section of the city. Members of the community were deeply concerned with racial and gender justice, and tried to create a self-sustaining community by raising silk worms (as well as the trees that the worms preferred).

As you look at the seal, you will also see the Holyoke Mountains in the background, and in the right top corner, the structure that looks like a castle represents the unique architecture of our City Hall. Famed architect William Fenno Pratt designed the City Hall building in 1849. Along the bottom of the seal, you will notice scales, representing the scales of justice, since Northampton is the County Seat, and home to the County Courthouse. You will also see a rake and hoe, reminders of Northampton's proud agricultural past - and present. The city is home to the oldest continuously running agricultural fair in the United States, held each September at the Three County Fairgrounds, and to two thriving Farmers Markets. Northampton was also the site of the famous Shay’s Rebellion, a crisis point in early post-revolutionary America.

During its existence, the Florence community attracted some of the greatest thinkers and activists of the time. Sojourner Truth made her home here for almost a decade at this time in the first house she ever bought. Born into slavery and later freed, she traveled the country as a speaker for abolition and women's suffrage. Fellow abolitionist Frederick Douglass frequently visited and spoke at the Northampton Association of Education and Industry. Lydia Maria Child and her husband lived in Florence at the time, as well, working to grow sugar beets in the hopes that the sugar cane plantation system of the South could be undermined, and that the system of slavery could be forced out through economic means. While the beet experiment ultimately failed, it is believed that Child was living in Northampton when she penned the famous Thanksgiving song, "Over the River and Through the Woods."