The Northampton Arts Council works to support and nurture the arts in the city of Northampton. The Council awards grants twice each year to artists and arts groups from both state and locally-raised funds, and seeks to improve public awareness of the arts. Its goals include maintaining and preserving the rich and diverse cultural heritage of Northampton, programming such annual and monthly events of interest to the community as Transperformance, First Night Northampton, Cinema Northampton, Silver Chord Bowl, KidsBestFest, Summer Concert Series, and advocating on behalf of the arts community. 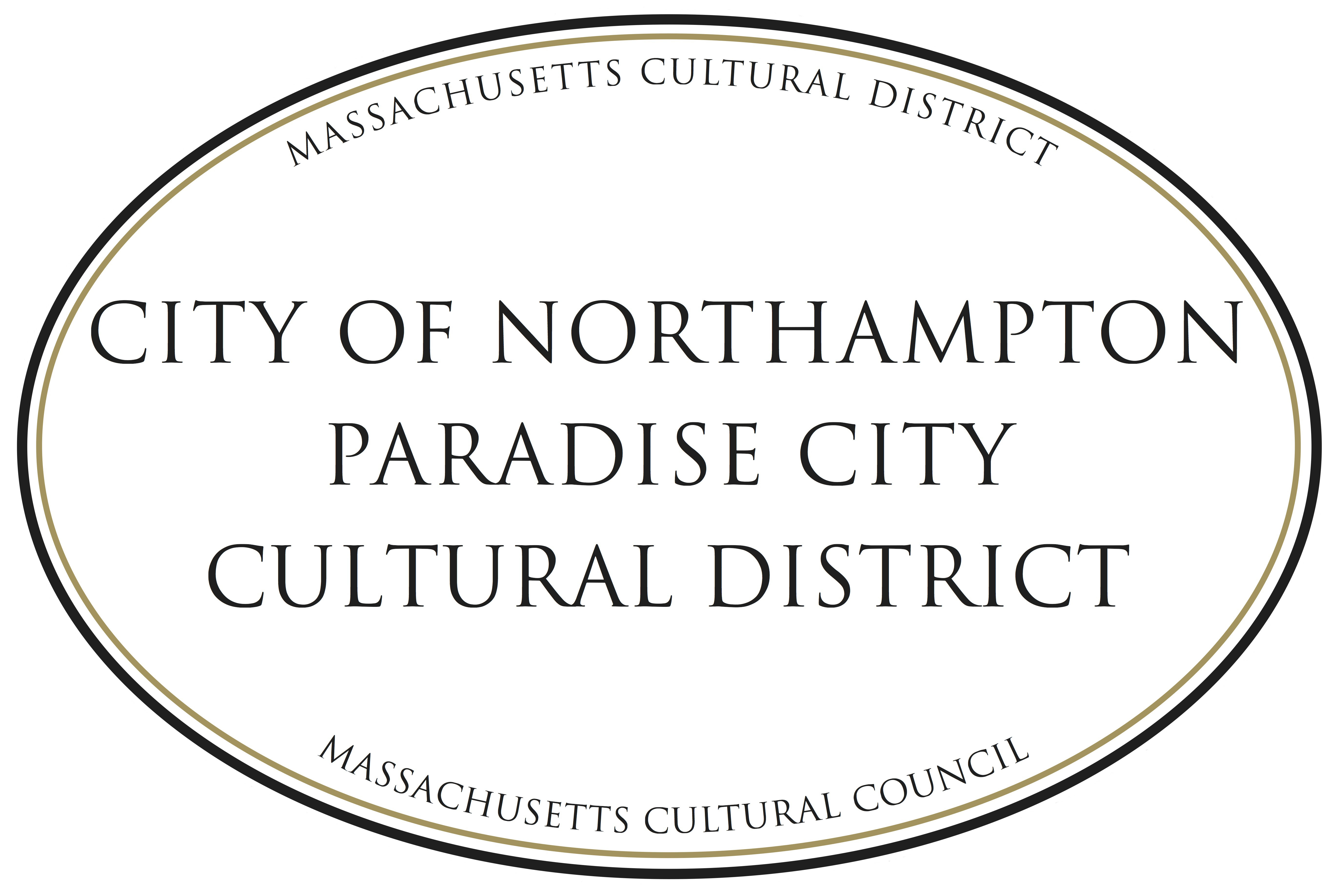 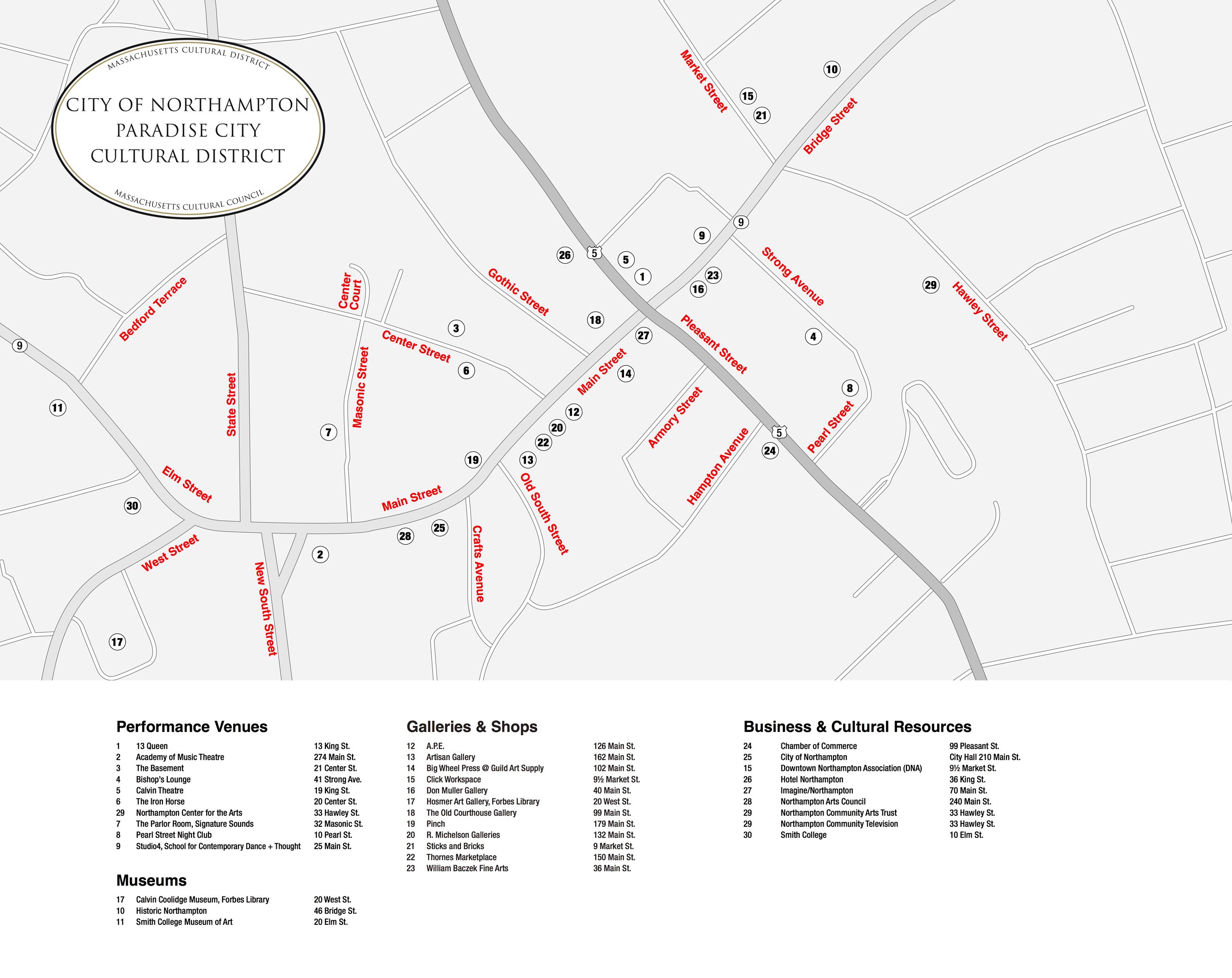 Since 2014, the Paradise City Cultural District has been fostered by the Northampton Arts Council, an incorporated, city-appointed board that works to support and nurture the arts in the city of Northampton.

As legend has it, renowned soprano Jenny Lind called Northampton “the most beautiful village in the world” and “the Paradise of America”. Her 1851 concert at the Old First Church in on Main Street drew a crowd of 1,800. A year later, she married her piano accompanist, and honeymooned in Northampton for three months before giving a farewell concert at the Town Hall. But Lind’s influence lived on after her departure. Eventually, the nickname “Paradise City” stuck.

Then and now, arts and culture are integral to Northampton’s identity and vitality. Amidst impressive—and largely intact—19th-century architecture, the city’s bustling downtown is brimming with galleries, music stores, artisans shops, antique stores, concert halls, diverse restaurants, cultural organizations, and institutions, including the renowned Smith College Museum of Art and the Academy of Music—the first municipally-owned theatre in the nation. Combined with monthly open studio nights, a plethora of family-friendly festivals and events, and hundreds of concerts per year, downtown Northampton possesses the high volume and eclectic mix of cultural assets, as well as a very cool vibe, envied by any successful arts district.

Today, along with being a charming place to live, work, and visit, the city has attracted a significant cluster of visual, literary, and performing artists and creative entrepreneurs while garnering many distinctive accolades, like:

“Great Cities for a Simple Life” by AARP Magazine, 2009

“Great Places in America” for Main Street from the American Planning Association, 2007

Award for Excellence for the “Best Downtown Shopping District” by the Retailers Association of Massachusetts, 2006

“Ten Great Places to Revel in Cinematic Grandeur,” as reported in USA Today, 2005;

“A Dozen Distinctive Destinations” by the National Trust for Historic Preservation, 2001

At the heart of this remarkable city is the Paradise City Cultural District, possessing assets and amenities supportive of a thriving arts scene, including: a visible creative sector; easy highway access; bus transit; high-speed Amtrak rail service; an attractive streetscape and skyline; a diverse selection of restaurants, cafés, and coffee shops; and in-city overnight accommodations.

Home to Smith College, Northampton is also among the Five College communities in the Pioneer Valley. College students bring diversity to the city and contribute to its eclectic nightlife. In addition, the Forbes Library, which is located within the cultural district is a valuable community resource that presents an active calendar of cultural programming for both children and adults, ranging from art exhibitions in its spacious community gallery, music/dance performances, writing/author workshops, poetry readings, knitting circles, and storytime. The Forbes Library is also the largest source of primary material on Northampton’s former resident and mayor Calvin Coolidge, and is the only public library in the United States to house a presidential collection.

Excerpt here: "Anything within a sidewalk, street, or on a public building, excepting property under the jurisdiction of the School Committee, that is considered public art by the Arts Council and is reasonably expected to last longer than 90 days, shall not be installed without a permit from the Arts Council. Public art may include, but is not limited to: murals, sculptures, and art installations."

If you or your organization are interested in creating public art or have questions surrounding your project please contact us by email or (413) 587-1269.

Street Musician's Permit for Northampton: For permission to perform in downtown Northampton, please download the Street Musician Permit Application and bring it to the Department of Public Works to get it signed. Then take the signed permit to the Police Department to obtain another signature.

Street Performer's Permit for Northampton: For permission to perform in downtown Northampton, please download the Street Performance Permit Application and bring it to the Department of Public Works to get it signed. Then take the signed permit to the Police Department to obtain another signature.

The Local Cultural Council (LCC) Program is the largest grassroots cultural funding network in the nation supporting thousands of community-based projects in the arts, humanities, and sciences annually.

The program promotes the availability of rich cultural experiences for every Massachusetts citizen.

Some of our funding priorities are:

--If you reside in another city, your project must be held in Northampton, Florence, or Leeds.

--Projects that include a public component that clearly benefit the residents of Northampton such as an exhibition, literary reading or performance held in Northampton.

--Non-profit cultural and educational institutions that offer programs and events which bring arts and culture to a Northampton audience.

--Projects that are feasible.

--Schools, not artists, should apply for projects that take place in schools.

Find more information about the Fall Grant Round

Ellen Augarten (ex-officio) has been a portrait photographer for over twenty-five years, specializing in fine black and white images of her favorite subject: people. She’s on the grant review committee and the exhibition committee.

Freeman Stein (Treasurer) is a retired educator and restaurateur. He has lived in Northampton/Florence for over thirty years. He has written grants and evaluated programs in education and the arts. He helped to develop and coordinate a visual and performing arts program for a public middle school, has worked with a wide range of artists and arts organizations to develop programs for students and teachers, and was a founding member of a public secondary school.

Rachel Hart is the Outreach Manager at Amherst Cinema where she raises support for the non-profit theater through memberships, donations, grants and volunteers. Prior to this she was the Associate Director of the Cinema Arts Centre in Huntington, NY and a Film Programmer and Administrative Director at the Roxie Theater in San Francisco. She earned her MA in Film Studies from San Francisco State University, where she also taught a course on Cinematheque Management. Rachel received her BA in Philosophy and Film from Clark University.

Danielle Amodeo (she/hers, Chair) oversees Communications and Public Programming at the Mead Art Museum at Amherst College. She received her Bachelor's Degree in European Studies from Amherst College and her Master’s Degree in Art History at Williams College. Danielle has worked in communications, education, programming, and outreach at Clark Institute of Art, Creative Time, Dentsu Aegis Network, Frick Collection, Teen Vogue, and New York City Council. She serves on the boards of the Amherst Center Cultural District, the Arts at Amherst Initiative, and the Northampton Arts Council. Danielle believes that art is for everyone and is devoted to working for equity and representation at museums and cultural institutions.

Kent Alexander (he/him/they/theirs) is an anti-racism/ workplace culture consultant. His current clients include Gilburg Leadership Inc., the Western Massachusetts Training Consortium, the Wildflower Alliance of Western MA, the Center for Community Resilience after Trauma, and the Hilltown Land Trust, among others. Kent is serving his third year as the diversity, equity, and inclusion advisor for the ValleyCreates initiative of the Community Foundation of Western Mass. More about Kent’s work can be found at www.mainspring change consultants.com. Kent is also a writer/performer whose work explores the multiple somatic responses to systematic oppression.

Jesse Hassinger (he/him/they/them) is the co-owner of the downtown Northampton restaurant Belly of the Beast, which opened in 2017 and has since been a strong community space for arts and social justice. Jesse has an MFA in Film/Video from the California Institute of the Arts where he focused in experimental film and cinematography. As a life-long lover of the arts in all forms, he is enthusiastic to be able to work with the Arts Council and the greater Northampton community as a whole on furthering access and greater inclusion to the Valley arts scene.

Board meetings take place in the City Hall Hearing Room at 210 Main Street from 7:00 PM - 9:00 PM. Please contact bfoote@northamptonma.gov for the up-to-date schedule and details.